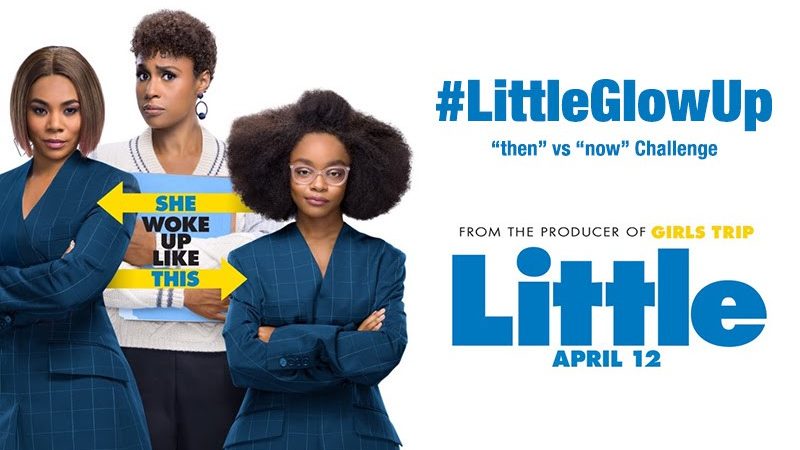 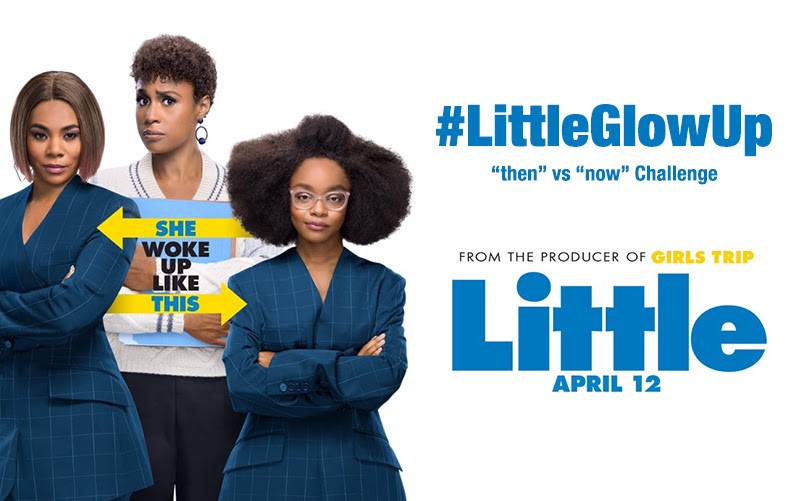 “Little” the movie is in theaters April 12th. I can’t wait to see this movie. The trailer had me and my whole family laughing.

Inspired by the popular trend, I would like you to share your side-by-side glow-up photos to enter the giveaway and use the hashtag  #LittleGlowUp and on Instagram.

One Little “I Woke Up Like This” Promo Custom Tank.
A Little Promo Eye Sleeping Mask (As seen in the film)
Pretty Little Promo Nail File

Girls Trip’s Regina Hall and Black-ish’s Marsai Martin both star as Jordan Sanders. Hall is the take-no-prisoners tech mogul adult version of Jordan. Martin is the 13-year-old version of her. She wakes up in her adult self’s penthouse, just before a do-or-die presentation.

Insecure’s Issa Rae plays Jordan’s long-suffering assistant April. The only one in on the secret that her daily tormentor is now trapped in an awkward tween body just as everything is on the line. Little is an irreverent new comedy about the price of success, the power of sisterhood and having a second chance to grow up — and glow up — right.

Will Packer, blockbuster producer of Girls Trip, the Ride Along franchise, and ten movies that have opened No. 1 at the U.S. box office, including Night School, No

Little is directed by Tina Gordon (writer, Drumline) with a story by Tracy Oliver (Girls Trip) and a screenplay by Oliver and Gordon. Based on an idea by teen actress Martin. The film is produced by Packer and his producing partner James Lopez and by Kenya Barris (Girls Trip, Black-ish), and is executive produced by Preston Holmes (Night School), Hall, Marsai Martin and Josh Martin.

Rules For The Giveaway:

Each household is only eligible to win #LittleGlowUp Challenge Prize Pack via blog reviews and giveaways. Only one entrant per mailing address per giveaway. You are not eligible to win if you have won the same prize on another blog. Winner is subject to eligibility verification.

END_OF_DOCUMENT_TOKEN_TO_BE_REPLACED

My kiddo and I have been creating a dish a week.

Perfect vehicle to share with you on #earthday T

So yah, this happened today. I was on The Drew B

Need a last minute tip for decorating those Easter

Easter is almost hear and these decorated Easter e

Finished up our last day of our #brewsandbrews tou

WOW!!! What an amazing 2nd day we had exploring @v

1st day in Boerne, TX was a success. Follow alon